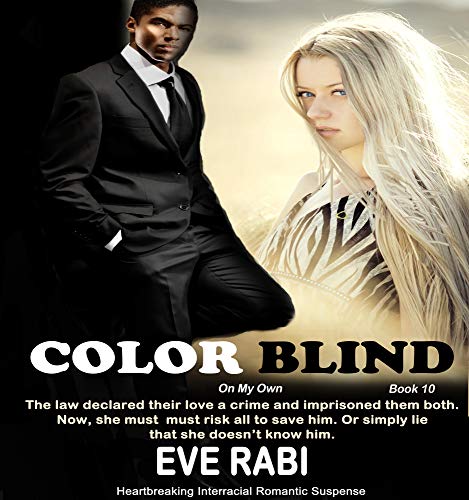 Color Blind – Romantic Suspense – The law declared their love a crime and imprisoned them both. Now, she must risk all to save him. Or simply lie that she doesn’t know him.: Book 10 Final installment

She was the face of racism, the daughter of an evangelist hellbent on segregation among the population. No one knew her secret – she was in love with the grandson of an African servant.………………………………Since their love is considered illegal, soulmates Sarie Vorster and Shabba Mxenge have no choice but to love each other in secret.

She was the face of racism, the daughter of an evangelist hellbent on segregation among the population. No one knew her secret – she was in love with the grandson of an African servant.
………………………………
Since their love is considered illegal, soulmates Sarie Vorster and Shabba Mxenge have no choice but to love each other in secret. Either that, or face imprisonment under the laws of apartheid.
However, one night, the police kick down their door and arrest both of them for contravening the Immorality Act, which prohibits sexual relations between the white population and people of color.
Sarie faces five years imprisonment, while Shabba faces ten years.
When Sarie’s father, Pastor Schoeman Vorster learns about Sarie’s arrest, he is horrified – how does he face his congregation, his supporters, his peers who are staunch crusaders of racial segregation?
To save his family’s reputation, the influential Pastor goes into damage control and comes up with a foolproof plan, one that has been used time and time again with great success – Sarie must simply state that Shabba has raped her. That he targeted her because of her stance against apartheid, kidnapped, then raped her.
If she does, she will be free within hours to return to her over-privileged lifestyle, and most importantly, Pastor Schoeman and his family will save face among their apartheid-loving church.
Who cares that Shabba would then face more 20 years in prison? Sarie does.
As much as she longs for her freedom, much to the ire of her father, she refuses to lie. She states that she would rather do time, than betray the man she has loved since childhood.
The pastor is furious at her and launches into plan B – together with a band of racist wardens, the man of God engineers situations in prison to systemically break his ‘rebellious’ daughter and force her to lie.
Life in prison becomes a nightmare for Sarie. Time and time again, she finds herself at breaking point.
The question is; how long can the teenager be strong for love, for the man she pledged to love forever? Will she eventually cave and lie to secure her freedom?
This is the final installment in the Color Blind Series.

‘Fast-paced, raw and entertaining with moments of unexpected humor, this book will have you staying up late into the late.’

‘Clear your calendar this weekend – Eve Rabi has a new tale and it’s kick**s as usual!’

‘OMG, Eve! Just when I think your writing can’t get any better, you surpass yourself! I am biting my nails, wondering what will happen next!’

WARNING:
This raw and angsty story is about a young couple’s ‘illegal’ love under an cruel, oppressive regime in South Africa, decades before Nelson Mandela became president. The author pulls no punches, showing it like it was, so you can experience apartheid firsthand through Sarie and Shabba’s love.
So, of course, this story contains racial themes, racial slurs, strong offensive language, violence, sexual violence and is not suitable for readers under 18.
If reading about racial injustice offends you or makes you feel helpless, you might want to pass on this book.

Brilliant What a roller coaster read Eve is such a talented author i have enjoyed this series and I only have 3 words to say after all this couple has been through – Thank The Lord – great ending loved it. 5 + stars.

Eve Rabi never disappoints Fantastic finish to this series. If you haven’t readColor Blind download the 10 books in the series now. You will not be disappointed.IHave read all Eva’s books and highly recommend this author.