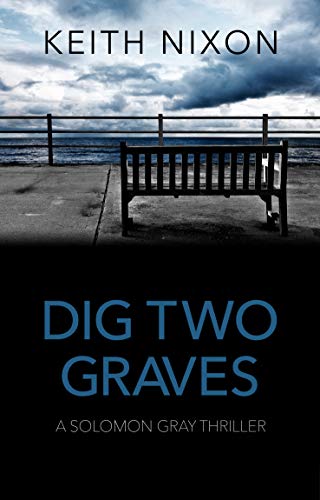 A cold, broken teenager lies beneath the looming shadow of his apartment building in an apparent suicide. Detective Gray stares, with tired eyes, at the body of Nick Buckingham, wondering why, at the age of 16, he would see no other choice but to jump from his balcony in such a final act … but

A cold, broken teenager lies beneath the looming shadow of his apartment building in an apparent suicide.

Detective Gray stares, with tired eyes, at the body of Nick Buckingham, wondering why, at the age of 16, he would see no other choice but to jump from his balcony in such a final act … but more importantly, wondering why this teenager, who he has never met, has Detective Solomon Gray’s phone number stored in his phone …

Facing his demons, follow Detective Sergeant Solomon Gray as he tries to unravel a murky world of lies and corruption to find the answers he’s desperate for.

Dig Two Graves is the first in the No.1 Best-Selling Solomon Gray series. Set in the once grand town of Margate in the south of England, this police suspense thriller is perfect for fans of Ian Rankin, Stuart MacBride, and Peter James.

“A stunning book and a new series that has become a must read.”
M.W. Craven, author of the Washington Poe series

“Dig Two Graves is a smartly conceived introduction to a new series, and there are a good number of loose ends just waiting to tempt you to continue the journey.”
Crime Fiction Lover

“Keith Nixon is one hell of a writer.”
Ken Bruen, author of the Jack Taylor series

“A dark, uncompromising tale of loss, murder, and revenge. Glorious noir, which takes the police procedural elements and gives them new life. I can’t wait to read the next step in Solomon Gray’s journey for answers …”
Luca Veste, author of the Murphy and Rossi crime series

“A damaged detective, haunted by a tragic past, a young son missing or dead, a man on a quest for redemption. Detective Sergeant Solomon Gray is a fine creation and Dig Two Graves is an intriguing, nourish mystery. Keith Nixon is a sparkling crime fiction talent.”
Howard Linskey, author of the Detective Ian Bradshawcrime series

“Keith Nixon does for Margate what Peter James did for Brighton … As dark and brooding as the wind-lashed shores of the North Sea, and with its disturbing echoes of the Elm Guest House scandal and suggestions of deep-seated institutional corruption, Dig Two Graves is a superb addition to the rich Brit Crime scene.”
Tim Baker, CWA shortlisted author of Fever City

Grabbed me from page one, great book The first book in the series of DS Soloman Gray books, Dig Two Graves grabbed me from the first page, mainly because he’s on the wrong side of the interview table. His son has gone missing at the Christmas carnival and his feelings of guilt and responsibility go on to shape him throughout the rest of the book.The majority of the book is set 10 years down the line, with occasional flashbacks, and surrounds the deaths of locals from the sleepy town of Margate, a place where only minor…

This is a very good read. We follow Solomon Gray a Detective Sergeant whose life has more dark clouds than a thunderstorm. Don’t be mislead, despite his at times gruelling existence it is a fast paced, well-written, gripping story, intertwining Gray’s personal history with a series of recent crimes that he is both working to solve and to some extent personally involved in.I loved this book. I love that the flaws of the people in it don’t feel contrived, even though if I sat down and wrote out all the things that…

Detective finds killer but loses son This detective is a troubled fellow and I can’t help but think his life would be easier if he got on better with his bosses, but that’s not how this excellent author writes this story.This isn’t the longest story, which must mean that I wanted it to go on longer.I hope he does find his son, but I expect that might be a few books down the series. Surely he’ll get back with his daughter sooner rather than later?I received from a free copy of this book, which…