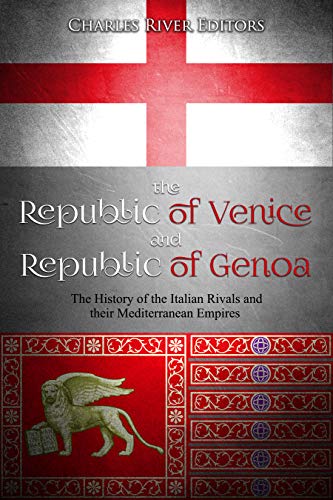 The Republic of Venice and Republic of Genoa: The History of the Italian Rivals and their Mediterranean Empires

*Includes pictures*Includes contemporary accounts*Includes a bibliography for further reading*Includes a table of contents The mystical floating city of Venice has inspired awe for generations, and it continues to be one of the most visited European cities for good reason. Tourists are drawn to the stunning blend of classical, Gothic, and Renaissance-inspired architecture across the picturesque

The mystical floating city of Venice has inspired awe for generations, and it continues to be one of the most visited European cities for good reason. Tourists are drawn to the stunning blend of classical, Gothic, and Renaissance-inspired architecture across the picturesque towns and villages, the charming open-air markets, the mouthwatering traditional cuisine, and of course, the famous gondolas drifting down the twinkling blue waters. While these gondolas, along with the time-honored models of the Venetian vessels docked in the harbors, are one of the city’s most defining landmarks, their beginnings are shrouded in a more obscure part of Venetian history.

Founded in the wake of the decline of the Roman Empire, the Republic of Venice lasted for more than a thousand years, from 697-1797, and in order to understand its singular position in world history, it is necessary to first note its geographical positioning and its topographical make-up: Located in northeastern Italy at the head of the Adriatic, the city is made up of 120 islands that are connected by 430 bridges that cross over 170 canals, referred to as a “rio” or plural “rii” (Italian for river). As a maritime power, the interests of Venice once reached all the way to Asia, which allowed it to form an important crossroads within the Eastern Mediterranean, in terms of trade. In Venice, a vast array of products (raw materials, spices, cloth) came all the way from North Africa, Russia, and India and were exchanged for the goods and wealth of Europe.”

In a country that is as crowded with famous cities as Italy, Genoa is usually not one that first leaps to mind, at least for an English-speaking audience. If Venice, Florence, and Rome are the top three, they are often followed by Pisa, Sienna, and Naples, not to mention the islands of Sardinia and Sicily. Indeed, Genoa would come towards the end of a much longer list, and it might be most closely associated with its famous native son, Christopher Columbus, who ultimately sailed for Spain. For avid tourists, Genoa might be the port of call for those wishing to visit the stunning Cinque Terre on the Ligurian coast nearby, and for an expert in world politics, the city of Genoa might recall the memories of the tragic events of the 27th G8 summit in July 2001, when, at the height of the anti-globalization movement, protests turned violent and resulted in the death of a 23-year-old Carlo Giuliani. In today’s news, Genoa might represent Italy’s crumbling infrastructure and the apparent powerlessness of its government to repair it – on Tuesday, August 14, 2018, one of the main bridges of the city, the Morandi Bridge, collapsed, killing 43 people and leaving 600 homeless. The bridge’s demise also destroyed Italy’s reputation as an expert in mechanical engineering.

Although Genoa cannot compete in the popular imagination with some of Italy’s more famous cities, this busy port town perched above the sea once boasted a powerful empire that rivaled that of Venice. It also lasted for roughly the same time period, rising in the early Middle Ages and coming to an end at the hands of Napoleon Bonaparte near the end of the 18th century. Beyond its own success, the city’s position at the head of the Mediterranean gave it an important strategic location from which to observe Italian and European history, as well as the world beyond. Today, historians are starting to correct the imbalance that has focused on Venice, Florence and Rome, and new histories are gradually introducing Genoa to the world, even as much remains to be uncovered.