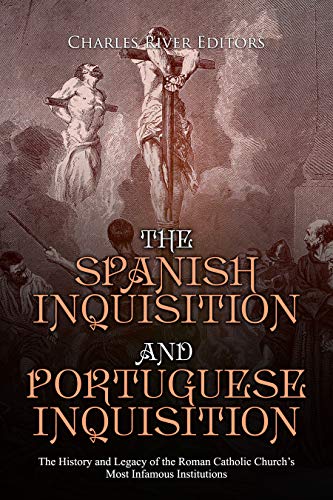 The Spanish Inquisition and Portuguese Inquisition: The History and Legacy of the Roman Catholic Church’s Most Infamous Institutions

*Includes pictures*Includes contemporary accounts*Includes a table of contents “Persecution is not an original feature in any religion; but it is always the strongly marked feature of all law-religions, or religions established by law.” – Thomas Paine, Rights of Man In many modern societies, laws have been put in place to protect citizens from discrimination based

“Persecution is not an original feature in any religion; but it is always the strongly marked feature of all law-religions, or religions established by law.” – Thomas Paine, Rights of Man

In many modern societies, laws have been put in place to protect citizens from discrimination based on their gender, beliefs, race, and sexuality. The sheer thought of having these rights impeded upon in any way is something people in the West often consider unthinkable. In this day and age, people will fight tooth and nail to right cases of discrimination and injustice, from seeking legal action to filing criminal charges against the discriminating party.

Multiple organizations around the world exist to help combat and protect its citizens from prejudicial inequities. Social media has also become a channel for those around the world to voice these injustices. Those around the world who empathize with the discriminated band together and condemn the accused bigots. Resulting boycotts, petitions, and negative backlash from social media and the Internet have been known to play a significant role in contributing to the downfall of individuals and corporations that have been accused of discrimination of any kind.

The road to the modern age of cultural harmony and acceptance is one of the finest feats of human progress, but having said that, there was once a time when the mere doubt of a religious figure’s existence was not only punishable by law, it could very well cost a man his life. This was the crime of heresy. This kind of religious persecution has been around for thousands of years, and Christians were often the victims, but when the Catholic Church began its rapid expansion throughout Europe during the Middle Ages, the tables were turned. In 1184, Pope Lucius III issued a papal bull that would kick off a long-standing tradition of heretic-hunting, and as a result, the Age of the Inquisitions commenced.

In a twist of events, the persecuted became the persecutors. From then on, the Roman Catholic Church took it upon itself to hold tribunals, or judicial courts, in a quest to exterminate heresy once and for all. These inquisitions, which would plague Europe for centuries, is believed to have seen hundreds of thousands persecuted for beliefs that went against the Church. A startling portion of them would be brutally tortured and sent to their deaths.

None of these would hold a candle to the one birthed in the 15th century – the Spanish Inquisition. The notorious inquisition, the subject of multiple documentaries, movies, and other pop culture mediums, is an era darkly remembered for its oppression, barbarous torture, and religious tyranny. Serving as a backdrop for it all was a deadly disease, a man likened to Satan, and the tumultuous rise and fall of one of the most dreadful periods in European history.

The Portuguese found access to the trade regions that they had been searching for, but sailing from Portugal to India and beyond would require too many resources to travel with at once. To remedy this problem, Portugal began establishing a number of forts and trading posts along the route. The Portuguese were able to establish a fort on the west coast of India, Fort Manuel, in 1500, and in 1505 a fort was erected off the coast of Tanzania, thus beginning a trend of European colonization in Africa and Asia that would last for the next 400 years. However, as the Catholic empires expanded across the globe, persecution would travel with them.

The Spanish Inquisition and Portuguese Inquisition: The History and Legacy of the Roman Catholic Church’s Most Infamous Institutions looks at how the Inquisitions came to be, and how people were tortured and executed. Along with pictures depicting important people, places, and events, you will learn about the Inquisitions like never before.