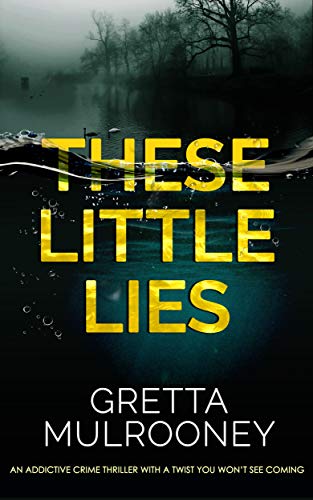 INTRODUCING THE NEW SERIES BY BEST-SELLING, CRITICALLY ACCLAIMED AUTHOR GRETTA MULROONEY. ‘It succeeds from the first pages.’ – Annemarie S. DETECTIVE INSPECTOR SIV DRUMMOND IS LOOKING FOR A FRESH START. WHAT SHE GETS IS TWO DEAD BODIES. It’s Detective Inspector Siv Drummond’s first day back on the job, joining a new team in a new

‘It succeeds from the first pages.’ – Annemarie S.

DETECTIVE INSPECTOR SIV DRUMMOND IS LOOKING FOR A FRESH START. WHAT SHE GETS IS TWO DEAD BODIES.

It’s Detective Inspector Siv Drummond’s first day back on the job, joining a new team in a new town. This fresh start isn’t going to be easy. Still mourning the death of her husband, she must push aside her grief to focus on her first case.

Lauren Visser and Matis Rimas are found stabbed to death in the idyllic woodland by the River Bere. Their mutilated bodies lie within feet of each other. A photograph of an unknown girl sits on Lauren’s chest.

She was an activist and wild swimmer. He was fishing illegally.

WHAT IS THEIR CONNECTION?

Siv and her team start ruling out suspects, but no one tells the truth when everyone has something to hide.

What will be dredged up by the investigation?

CAN DI SIV DRUMMOND FIGHT THE CURRENT OF LIES OR WILL SHE BE SWEPT AWAY?

Elegantly written, THESE LITTLE LIES is a masterclass in slow-burning suspense that will keep you turning the pages into the early hours.

MEET THE DETECTIVE
Detective Inspector Siv Drummond is widowed following a tragic accident involving her husband. With everything in London reminding her of the past, she moves from a high-profile squad with the Met to a new job as DI in her old home town — sleepy, seaside Berminster. She’s still grieving and lonely, but she’s a fighter and she’s smart, which earns her the respect of her colleagues DS Ali Carlin and DC Patrick Hill, and the grudging approval of her DCI, who wants his protégé to get her job.

WHAT READERS ARE SAYING ABOUT THESE LITTLE LIES
‘I loved this first in the DI Siv Drummond series, may there be many more to follow. I couldn’t put the book down, but tried to read slowly…didn’t want it to end. It’s great having a book that you can’t wait to get back into.’ – Hannelore C.

‘I thoroughly enjoyed These Little Lies which is a good procedural with several twists and a well concealed motive and perpetrator.’ – Elaine T.

‘Enjoyed it immensely – read it in one day, ignoring all else.’ – Aileen G.

‘The first in the series can often be a difficult thing… you’ve got to set up the scenes and the characters. This one did it well.’ – Louise T.

PREVIOUS PRAISE FOR GRETTA MULROONEY
‘A pleasure to read.’ – The Independent

‘A memorable tale with a shocking denouement.’ – Time Out

‘I had plenty of guesses, all of them wrong so the novel held my attention throughout. The pacing is excellent.’ – E. Tomasso

‘The book moves along at a steady pace and gains momentum as it progresses. There are many twists and turns along the way as the reader is caught up in the intrigue and suspense towards a real jaw dropping shocker of an ending nobody will see coming.’ BOOKS n ALL

‘A thoroughly enjoyable read and extremely well thought out. Had me puzzled as an avid crime reader.’ Carole

‘A fascinating read with many twists and turns that keeps you guessing to the end. A must read.’ Greta H.

A gripping thriller I have been a fan of Gretta’s work for a little while now. I first discovered how fabulous a writer Gretta is, when I was invited to take part in the blog tour for one of Gretta’s earlier titles. Since then I have devoured each and every book that she has released since as well as caught up on her previous releases. I heard a whisper that she was due to release the first book in a new series. I was eager to get my hands on a copy as I knew that I was going to be in for one hell of a read…

Engaging complicated plot Very well written detective thriller. Sic us a sympathetic main character with a difficult family background – recently widowed and with the mother from hell. (This also paves the way for a second book ). Plot has lots of twists and turns with characters who you really think are culprits – and who you want to be culprits, but then……

Great story, and characters you feel involved with – recommended! Couldnât put this down! Great characters and a good plot line, with lots of possible suspects for firstly two murders, followed by a third. Det Inspector Siv Drummond, returning to work after absence following the tragic and sudden death of her husband, has to pull together her team to investigate the case, with very little support from her boss. I do hope there will be more stories with DI Drummond. Thanks for the ARC.