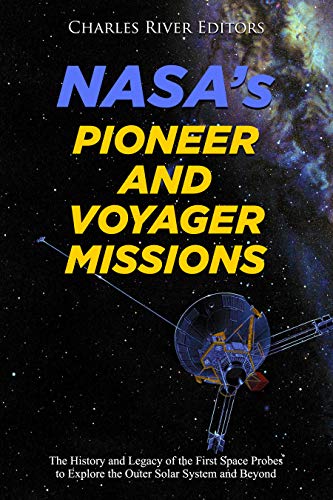 NASA’s Pioneer and Voyager Missions: The History and Legacy of the First Space Probes to Explore the Outer Solar System and Beyond

*Includes pictures*Includes a bibliography for further reading*Includes a table of contents Today the Space Race is widely viewed poignantly and fondly as a race to the Moon that culminated with Apollo 11 “winning” the Race for the United States. In fact, it encompassed a much broader range of competition between the Soviet Union and the

Today the Space Race is widely viewed poignantly and fondly as a race to the Moon that culminated with Apollo 11 “winning” the Race for the United States. In fact, it encompassed a much broader range of competition between the Soviet Union and the United States that affected everything from military technology to successfully launching satellites that could land on Mars or orbit other planets in the Solar System. Moreover, the notion that America “won” the Space Race at the end of the 1960s overlooks just how competitive the Space Race actually was in launching people into orbit, as well as the major contributions the Space Race influenced in leading to today’s International Space Station and continued space exploration.

Space exploration was always an expensive business, and throughout NASA’s history, the agency has had to justify to Congress its need for every dollar it intended to spend. This problem has helped NASA to be more careful and more creative with the money they did receive, and scientists had to justify the equipment they wanted to include on each space probe. They had to justify the size and the power demand, too. If they wanted too much, the entire mission might be scrubbed, and all their work would have been for naught. This made planning and designs leaner and more efficient, as scientists and engineers were more careful with their recommendations.

At the same time, scientists have been repeatedly surprised by their discoveries. Some of those discoveries revealed the dangers of space, like the Van Allen radiation belt, dangerous to astronauts without the right kind of protection. NASA also discovered the massive radiation belt surrounding Jupiter thanks to the Pioneer probes in 1973 and 1974. Similarly, with the knowledge that Titan, the largest moon of Saturn, has a thick atmosphere, later missions were sent to investigate the moon up close. Thus, the Huygens lander pierced the Titan atmosphere in January of 2005 to investigate.

Although Apollo 11’s successful mission to the Moon is seen as the culmination of the Space Race, and the Apollo program remains NASA’s most famous, one of the space agency’s most successful endeavors came a few years later. In fact, the Pioneer program was the most diversified sequence of any of NASA’s programs, and though they’re now remembered for being among the first probes in history to reach the Outer Solar System, the elaborate planning changed goals several times over several years before resulting in historic successes. NASA had wanted to do a Grand Tour of the Solar System toward the end of the 1970s to take advantage f the scheduled alignment of planets, which meant the Pioneer missions were meant to be test runs prior to the main events (Voyager 1 and Voyager 2), and a great many things discovered by Pioneer 10 and Pioneer 11 were essential to the successful planning of the Voyager probes.

In 1977, the Voyager spacecraft were launched from Earth to explore the outer Solar System, and incredibly, the now-ancient technology from the 1970s is still working, sending daily reports back to the planet that sent the two robotic envoys on their way over 40 years ago. Voyager 1 and 2 have done far more than accomplish their original missions. In fact, they are now exploring interstellar space, far beyond the outer planets in the cold wasteland between the stars. Each spacecraft carries a copy of a golden record which contains an introduction to Earth, should some alien civilization happen to encounter either Voyager 1 or Voyager 2. In the first Star Trek movie, writers imagined just that, creating a story of a Voyager spacecraft being captured and adapted for its own uses.