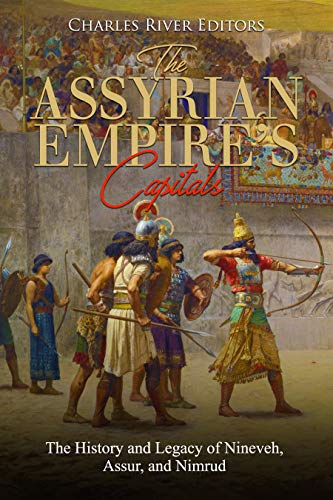 The Assyrian Empire’s Capitals: The History and Legacy of Nineveh, Assur, and Nimrud

*Includes pictures*Includes excerpts of ancient accounts*Includes a table of contents When scholars study the history of the ancient Near East, several wars that had extremely brutal consequences (at least by modern standards) often stand out. Forced removal of entire populations, sieges that decimated entire cities, and wanton destruction of property were all tactics used by

When scholars study the history of the ancient Near East, several wars that had extremely brutal consequences (at least by modern standards) often stand out. Forced removal of entire populations, sieges that decimated entire cities, and wanton destruction of property were all tactics used by the various peoples of the ancient Near East against each other, but the Assyrians were the first people to make war a science. When the Assyrians are mentioned, images of war and brutality are among the first that come to mind, despite the fact that their culture prospered for nearly 2,000 years.

Like a number of ancient individuals and empires in that region, the negative perception of ancient Assyrian culture was passed down through Biblical accounts, and regardless of the accuracy of the Bible’s depiction of certain events, the Assyrians clearly played the role of adversary for the Israelites.

Although the Biblical accounts of the Assyrians are among the most interesting and are often corroborated with other historical sources, the Assyrians were much more than just the enemies of the Israelites and brutal thugs. A historical survey of ancient Assyrian culture reveals that although they were the supreme warriors of their time, they were also excellent merchants, diplomats, and highly literate people who recorded their history and religious rituals and ideology in great detail. The Assyrians, like their other neighbors in Mesopotamia, were literate and developed their own dialect of the Akkadian language that they used to write tens of thousands of documents in the cuneiform script (Kuhrt 2010, 1:84). Furthermore, the Assyrians prospered for so long that their culture is often broken down by historians into the “Old”, “Middle”, and “Neo” Assyrian periods, even though the Assyrians themselves viewed their history as a long succession of rulers from an archaic period until the collapse of the neo-Assyrian Empire in the 7th century BCE. In fact, the current divisions have been made by modern scholars based on linguistic changes, not on political dynasties (van de Mieroop 2007, 179).

When Nineveh was at its height, they controlled an empire that encompassed Egypt, Anatolia, Mesopotamia, and parts of Iran. Eventually, the Assyrians overextended themselves and their enemies overthrew them and destroyed much of their cities. Nineveh became lost for centuries, only mentioned in fragments by classical Greek historians, but modern archaeological methods were able to bring the lost city back to life.

In northern Iraq, on the banks of the Tigris River, lie the ruins of the ancient city of Aššur, the first capital and the most important religious center of the Assyrian Empire. Known today as Qal’at Sherqat, and also as Kilah Shregat, the city dates back to the 3rd millennium BCE. In that time period, the Assyrian army became the largest yet seen, and their warriors were both the greatest and cruelest in the land. They conquered an empire from the Persian Gulf to the Mediterranean Sea; they despoiled the great city of Babylon, and they enslaved the tribes of Israel. Even the pharaoh of Egypt paid them tribute. No army had ever carried war so far.

The city of Nimrud was one of the Assyrians’ most important cities, and it has been known by many different names throughout its history. In ancient Assyrian, the city was called Kalḫu, a name first attested to in texts dating back to the 13th century BCE. An ancient Assyrian capital during the Neo-Assyrian period, the city has produced many glorious artifacts and provided countless insights into this ancient civilization, but the history of the city after the fall of the Assyrians has proven just as turbulent and interesting.