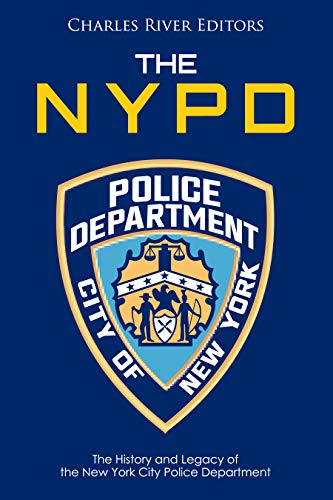 The NYPD: The History and Legacy of the New York City Police Department

*Includes pictures*Includes a bibliography for further reading*Includes a table of contents Of all the great cities in the world, few personify their country like New York City. As America’s largest city and best known immigration gateway into the country, NYC represents the beauty, diversity and sheer strength of the United States, a global financial center

Of all the great cities in the world, few personify their country like New York City. As America’s largest city and best known immigration gateway into the country, NYC represents the beauty, diversity and sheer strength of the United States, a global financial center that has enticed people chasing the “American Dream” for centuries.

America’s prototypical metropolis was once a serene landscape in which Native American tribes farmed and fished, but when European settlers arrived its location on the Eastern seaboard sparked a rapid transformation. Given its history of rapid change, it is ironic that the city’s inhabitants often complain about the city’s changing and yearn for things to stay the same. The website EV Grieve, whose name plays on the idea that the East Village “grieves” for the history and character the neighborhood loses every day to market forces and gentrification, regularly features a photo of some site, usually of little interest: an abandoned store, a small bodega, a vacant lot. The caption says, simply, that this is what the site looked like on a given day. The editors of the website are determined to document everything and anything for future generations.

While America’s biggest city constantly changes, the largest police force in the United States, the New York Police Department, is no stranger to the limelight. Quite the contrary, the NYPD has become immutably entrenched in American culture, past and present. The acronym itself, while a mouthful, is effortlessly musical and therefore commands a certain presence. It is also the most internationally renowned police department, recognizable even to non-Americans and non-native English speakers, thanks to the virtually incalculable depictions of the department in various forms of literature, movies, and television shows. Chances are people across the world have stumbled on media depictions of the NYPD, such as Sidney Lumet’s Serpico, the Die Hard franchise, NYPD Blue, and even lighthearted comedies like Brooklyn Nine-Nine.

Of course, the limelight is much like a double-edged sword, and there is a noticeable rift in New Yorkers’ perception of their homegrown police force. To some, NYPD officers – excluding a few bad eggs – have, throughout history, endeavored above and beyond time and again to fulfill their duty to protect and serve. Their valiance is best exemplified by the unparalleled heroism they exhibited during the devastating terrorist attacks on 9/11, during which 23 NYPD officers died after rushing to the horrific scene to aid people. Dozens more have since succumbed to the incurable, mostly lung-related illnesses they contracted during the rescue operations at Ground Zero. These unflinching first responders helped save up to 25,000 others around the area that day.

On the opposite end of this rift are those who are anything but fond of the NYPD. Many critics consider the NYPD’s reputation permanently marred by the scores of scandals that the department has been mired in since its very inception, including evidence tampering, various forms of corruption, and especially police brutality and violence stemming from institutional racism. Not only has the NYPD been accused of disproportionately targeting and harassing African-Americans, Muslims, and other minorities, one of its officers was involved in one of the many tragedies that propelled the rise of the Black Lives Matter movement.

As this suggests, the NYPD’s history is anything but straightforward. The NYPD: The History and Legacy of the New York City Police Department examines how the department took shape and grew, and some of the most important people and events in its history. Along with pictures depicting important people, places, and events, you will learn about the NYPD like never before.